Since my creative capacity is limited to offensively poor grammar and an ability to ramble like a street schizophrenic ad nauseam, I decided to let someone who does have some artistic ability to drop some knowledge on how to work your way around the world by using nothing but your raw expressive ability. Your hippie mother would be proud. So without anymore aimless verbal meandering, here is Kristin Addis’s experience find creative work abroad.

I don’t get it

I said to the hostel manager sitting across from me at the Backpacker’s Hostel in Vientiane, Laos.

Why would anyone work at a hostel in exchange for just room and board, especially when a dorm bed is so cheap?  It makes no sense!  It’s peanuts!

Unfazed, he pointed to the mural behind me.  It was a psychedelic-looking tree with intricate detail throughout its green trunk, fairies flying around the branches, and planets orbiting where leaves should be.

The girl who painted that got free accommodation, and all the Beer Lao she wanted.

My ears perked up.  Gratis Beer Lao?  I do love me some Beer Lao.

You know how to paint?

Sure, I have painted previously.  The last time was six years ago, with oil paints, on a 12×12 inch canvas, and I have only ever painted landscapes, but yes, I’ve painted.  Sure.

The plan was hatched.  I would remain in Vientiane a day longer than planned and I would and start on a mural.  What would I paint? We weren’t sure.  He suggested perhaps an elephant. 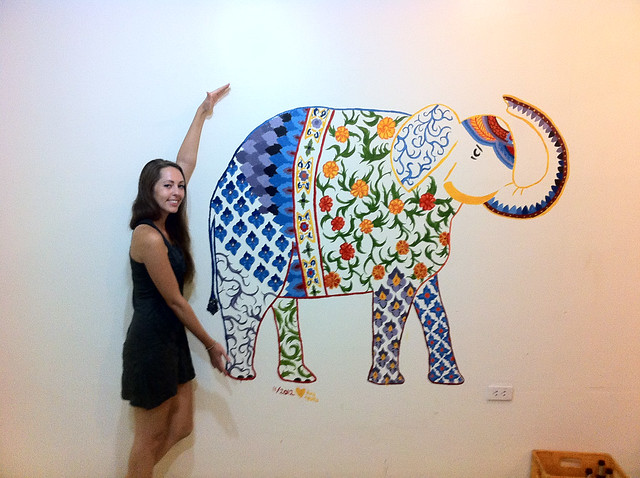 The hunchbacked hostel owner with exactly one volume level (which is one decibel above screeching) pulled me by the wrist to hop on his motorbike.  There was only one helmet, which he of course wore.  Standard.

We weaved through the Vientiane traffic under the blistering hot sun and sticky-wet humidity.  The paint shop was like an overstuffed Home Depot crammed into a tiny roadside merchant edifice (it was no Benjamin Moore).  My tools would be two brushes, three primary colors of paint, and a pencil.

I may have gotten in over my head.

Without much of an idea what to do, I wandered across the street and started taking pictures of the designs on the Buddhist wat.  The idea of a tattooed elephant came to me and I elected to run with it.

Immediately I headed back inside, stuck in my headphones, and began sketching.  I wasn’t going to put paint to wall until both the owner and manager were satisfied with the design.  I got the green light and applied some green paint before pausing for the night. 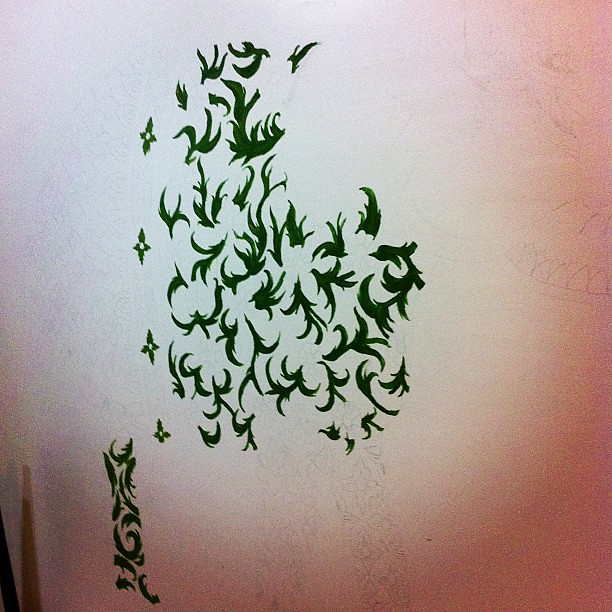 It turned out that mural painting in the Laotian heat with no fan or air conditioning, standing on a chair or reaching up from the floor to painstakingly apply another color of paint was backbreaking work.

The next day with Crowfoot paint store supplies I spent nearly eight hours painting.  The occasional hostel guest would come by, looking pensive, stroking his chin and either nodding in approval, smiling big and giving me the thumbs up, or keeping on the dreaded poker face.

C’mon, give me something! Love it, hate it, but at least react!

When I finally finished, I was exhausted and hopeful that the hostel owner would be happy with my work.  It was stuck on his wall, after all.

It turned out that he was happy.  So happy, in fact, that he wanted me to stay and paint more murals.  He wanted his guest house to be the best guest house in Vientiane, and surely that started with colorful walls, right?

I wasn’t very motivated.  Spend another day or two in Vientiane?  There was nothing to do in the city (apart from paint) and I had only stopped by to get a 60-day Thailand visa.  I had friends waiting for me in Vang Vieng.  I needed to go!

The next day was another sweaty, on-my-feet, tiring, ten-hour day.  Each of the three dorm rooms was given an animal theme – anaconda, monkey, and tiger.  I painted like a mad woman.  I wanted the cash, beer, and to be out of there by the next morning. 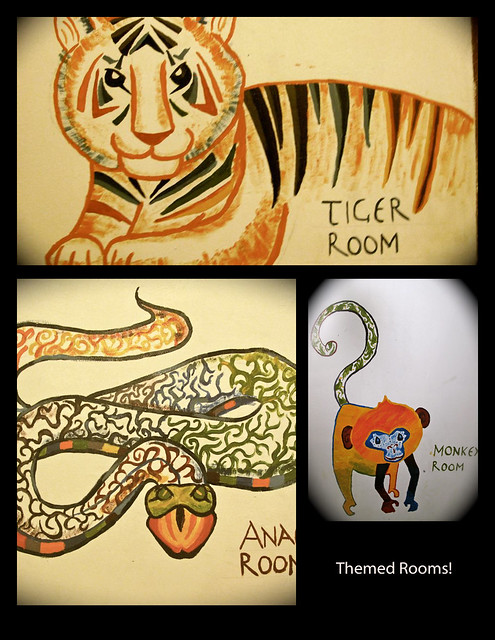 Oh, I thought the murals would be bigger

Michael, I am not staying any longer! Are you holding up your end of the bargain?

Reluctantly he handed over 100 crisp US dollars.  I left that afternoon and spent the next five days in an inner tube in Vang Vieng, watching as the last of the paint slowly but surely washed off of my hands (and feet, and legs, and, well, it got everywhere).

A week later I heard a girl in my hostel in Luang Prabang talking about staying in the Tiger dorm in Vientiane.

She had been impressed.  She even took a picture.

It felt good, and it was clear that it had been worth the extra time, sweat, and spilled paint to leave my mark in Laos.  What’s more, I got to do arts and crafts time in exchange for beer, cash, and a free dorm bed.  Now, each time I get to a new hostel, I keep my eyes open for bare walls, potentially ripe for the painting.  Who knew getting a job like this is as easy as starting a conversation with a hostel manager?